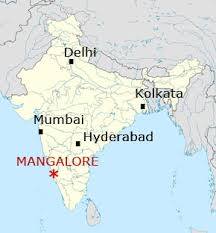 Mangalore is the chief port city of the Indian state of Karnataka. It is located about 350 kilometres (217 miles) west of the state capital Bangalore. Bound by the Arabian Sea and the Western Ghat mountain ranges, Mangalore is the administrative headquarters of the Dakshina Kannada (formerly South Canara) district in south western Karnataka.

It developed as a port on the Arabian Sea – remaining, to this day, a major port of India. Lying on the backwaters of the Netravati and Gurupura rivers, Mangalore is often used as a staging point for sea traffic along the Malabar Coast. The city has a tropical climate and lies on the path of the Arabian Sea branch of the South-West monsoons. 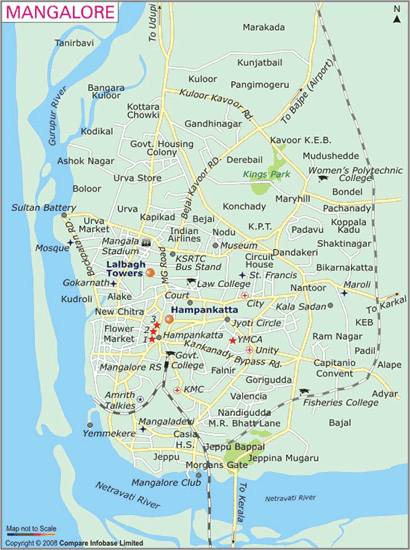 The Mangalore Port 10 km north of the town, is now India’s ninth largest cargo handling port. It handles 75% of India's coffee exports and the bulk of the nation's cashew exports. Mangalore today is a blend of the new and old.

It  was ruled by several major powers, including the Vijayanagar dynasty, Chalukyas, Rashtrakutas, Hoysalas, Mysore and Keladi rulers and the Portuguese. Mangalore remained part of the Madras Presidency until India's independence in 1947. The city was unified with the state of Mysore (now called Karnataka) in 1956.

Mangalore is demographically diverse with several languages, including Tulu, Konkani, Kannada, and Beary commonly spoken, and is the largest city of Tulu Nadu region.

The city's landscape is characterized by rolling hills, coconut palms, freshwater streams, and hard red-clay tiled-roof buildings. In an exercise carried out by the Urban Development Ministry under the national urban sanitation policy, Mangalore was placed 8th cleanest city in the country. In Karnataka it is 2nd after Mysore. 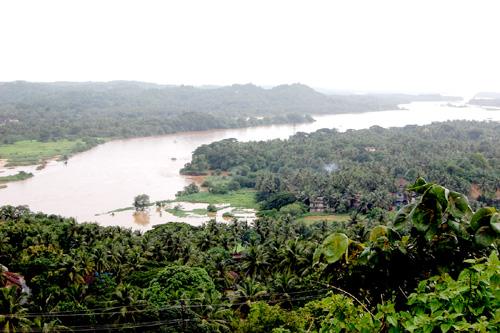 HOW TO REACH MANGALORE?

BY TRAIN
Mangalore has two major railway stations.
Mangalore Central (IR station code : MAQ) is located at Hampankatta, in the heart of the city. It is a terminus and is used only by the trains which terminate at Mangalore. ( the venue is just one  kilometer from Mangalore Central railway Station)
Mangalore Junction (IR station code : MAJN) is situated in Kankanady, about 5 km from the city centre. Most long-distance trains and all trains not terminating at Mangalore stop at this station.

Surathkal (IR station code : SL) is situated in Surathkal, about 18 km from the city centre. Most long-distance trains moving on the either to north or south India stop here.

Udupi (IR station code : UD) is situated in Udupi District, about 87 km from the Manglore City . Most long-distance trains moving on the either to north or south India stop here.

The other one is behind the Town Hall. It is known as the 'State Bank' stand by the locals, because of its proximity to a branch of the State Bank of India. It is the last stop for most of the private bus services to Mangalore (mostly Inter-District viz. Mangalore-Udupi and Inter-taluk buses and also city buses).

There is a third bus-stand (not exactly a bus-stand but an alighting point for passengers) in front of Milagres Church where most private tour and bus operators: Ideal Travels, Canara, Canara-Pinto, Vishal Travels, Anand Travels, VRL, Ideal  etc. have their offices. They operate buses of semi-deluxe, sleeper and Volvo types to various destinations viz. Mumbai, Bangalore, Goa, Thrissur, Hubli-Dharwad etc.

Various other pick-up points and drop points are there in Mangalore city according to your convenience! There are numerous bus services from Mangalore to all the nearby towns in Karnataka and Kerala. The long-distance bus services to major cities like Bangalore, Mumbai, Hubli-Dharwad and Goa run along the National Highways radiating to the North (towards Goa and Mumbai) NH-66, South (towards Kerala) and the East (towards Bangalore) NH-75.

MANGALOREAN  FOOD
Mangalorean cuisine is largely influenced by the South Indian cuisine, with several cuisines being unique to the diverse communities of the city. Cuisine in Mangalore has roots in the history, geography and culture of the land.

The staple food here, available in most establishments, is the Fish Curry Meal 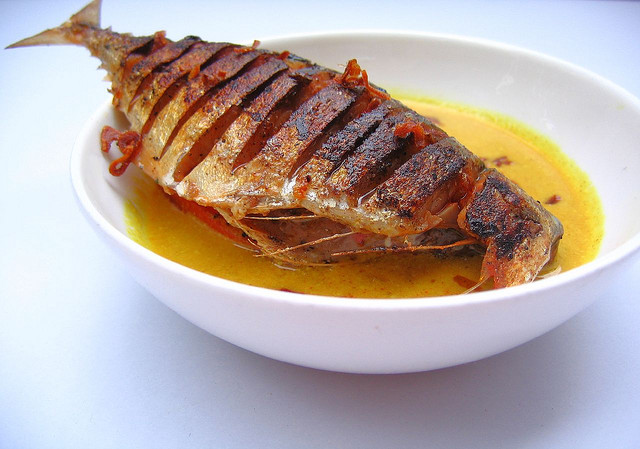 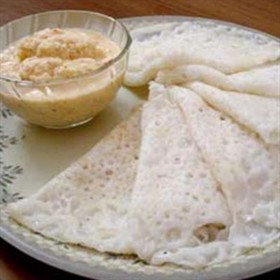 Neer dosa, a variant of dosa,and Pundi (Rice Ball) are native to Mangalore. Coconut and curry leaves are common ingredients to most Mangalorean Curry, as are ginger, garlic and chili. Mangalorean Fish Curry is a popular dish throughout India. 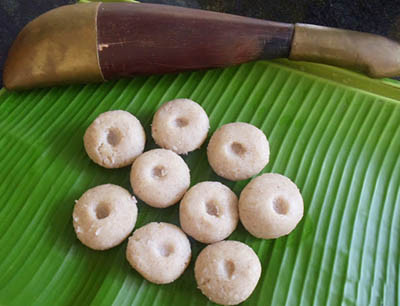 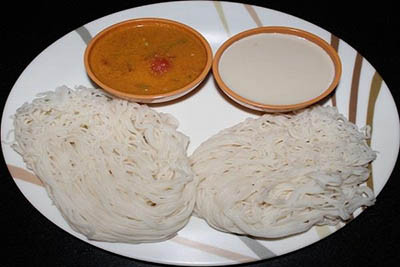 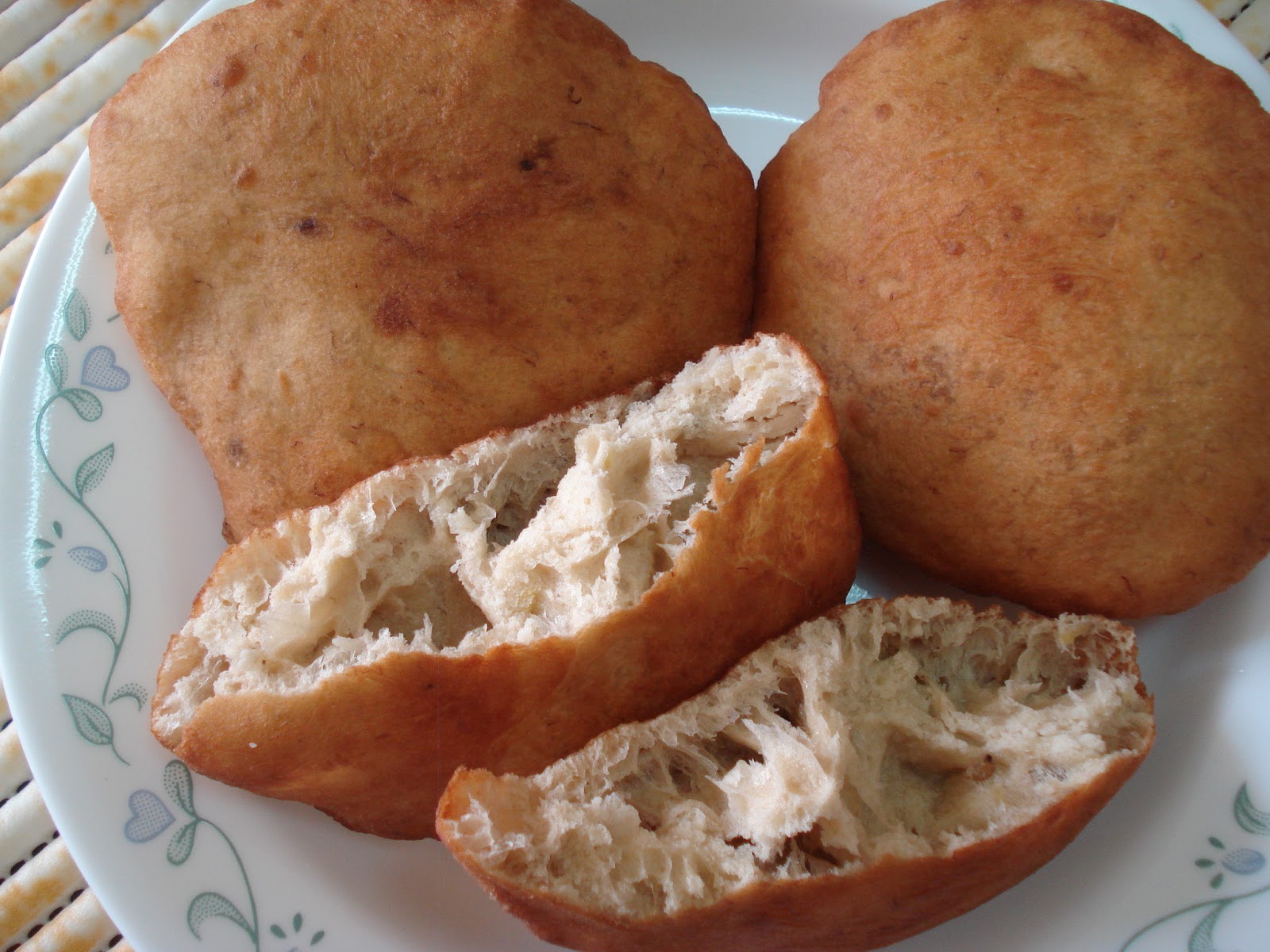 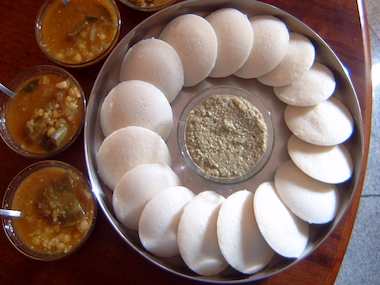 The Konkani community's specialities include Daali thoy, beebe-upkari (cashew based), val val, avnas ambe sasam, Kadgi chakko, paagila podi, and chana gashi. Vegetarian cuisine in Mangalore, also known as Udupi cuisine, is known and liked throughout the state and region in the name of Udupi Hotels. 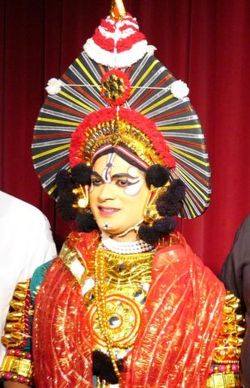 The South Canara district of the British period is popularly  known as Tulunadu. The area comprises Dakshina Kannada and Udupi districts of Karnataka State and parts of Kasargod district of Kerala. The Tuluva region is a cultural entity, though at present visible only as one peering out of the marsupial pouches of larger presences of Kannada, and to a lesser extent of Malayalam. But it constitutes an authentic and intellective unit of historical and cultural study.

According to Legend, The district was reclaimed by Parashurama from sea. Dakshina Kannada is well known for popular folk art 'Yakshagana' (a fabulous costumed dance drama form). The languages spoken in Dakshina Kannada are Tulu, Kannada, Konkani and Byari.

The District has several famous pilgrim centres. The district is a leader in more than one way in banking, private entrepreneur-ship and in general awareness amongst people. The undivided district has given birth to five major commercial banks of which four are nationalized banks apart from general insurance companies. The district is popularly known as the cradle of banking industry.

ABOUT THE VENUE OF THE CONFERENCE 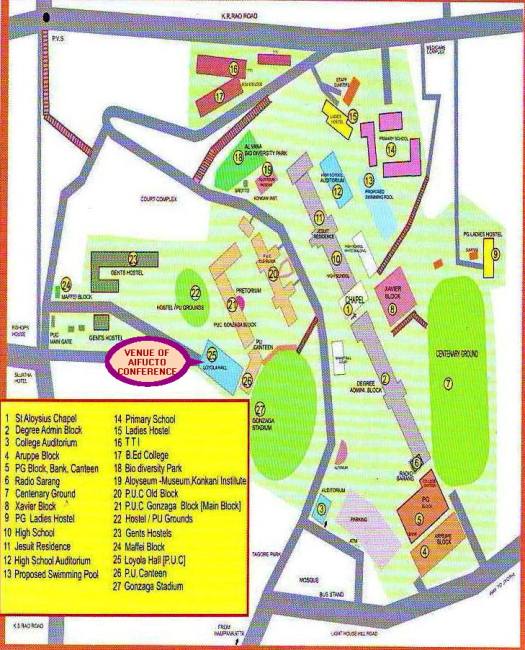 St Aloysius College – the premier minority educational institution with more than 133 years in existence has been at the service of the youth of Mangalore and its environs, as an educational institution run by the Mangalore Jesuit Education Society (MJES), for the education, formation and professional preparation of young people of all castes, creeds and communities without any discrimination. However as an institution run by the Jesuits it places a special accent on preferential option for the marginalised and gives priority to their empowerment. The college is autonomous from June 2007 onwards and is affiliated to Mangalore University. The College strives towards creating conducive environment for learning by offering 6 undergraduate, 6 postgraduate diploma, 17 post graduate degree and 8 doctoral programmes. Currently around 5000 students pursue their studies in the campus

With over 14,000 students, boys and girls, from primary to Ph.D. programmes, the campus is known for its salubrious atmosphere, community culture, excellence in teaching, high degree of discipline, deep mutual respect, abiding spirit of tolerance, strong appreciation for all cultures, deep reverence for all religion, intense attachment to ethical values, state of the art facilities and multiplicity of avenues for all round growth of individual.

The college aims at an integral formation of youth, striving to form individuals who are academically competent, morally strong, artistically accomplished, physically fit, socially concerned and personally balanced. Those who pass out of this institution are to be men and women for others empowered with great capacity to contribute to the building up of a more humane and just world where all have access to life in its abundance.