Students' Feedback: the Hype that is the Biggest Paper-Guzzler 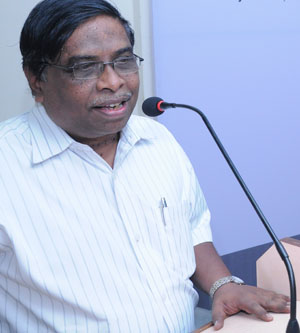 April 18, 2013 : Stepping into the twilight zone of career exit, the tendency for introspection and nostalgia are more than the planning that is to be done for the post-exit. The practices that have been carried on for the mere hype with no tangible benefit present themselves in the forefront for the mindless dedication with which they were pursued. One such practice as a plagiarism of the US practice is getting the students feedback every year on the performance of the faculty. Not being subjected to the critical anvil, it parades about to dominate the education scene of not only the Colleges, but also the corridors of high schools and primary schools. We have to only wait to see when the practice will be extended to kindergarten classes and baby-care centres and play-homes. It is being carried on with an aura of self-justification that anyone who tries to question the practice, the modalities or the utility will be instantly termed as a radical resisting the change.

Organisation & Methods (O&M) is a subject that is being relegated to nullity by most of the management schools and commerce curriculum. In fact, I have my own uncertainty regarding the number of people who are aware of the existence of such a management topic. It is not only complexity of the subject, but also the personalised styles of management practiced in varied organisations like government departments, corporate, NGOs, social organisations etc that found it convenient to banish such a subject. The discipline of Organisation of Methods puts under scanner the procedures and practices followed in organisations and questions the justification of them and also the relevance of the documents and the number of copies used in transactions. Mahatma Gandhi suggested a universal solution by advocating a paperless society. Hierarchy style of management borrowed from the Military suited every organisation very well because it helped the manager to run his department as his personal fiefdom.

The real break came from technology which cut down many a procedure in order to achieve speed in the delivery of work. The corporate like Apple Corporation went in for a flat organisation in order to avoid the delays in creating and compliance with the procedures. This has come about due to the participation of companies from Israel in the development of electronics. There is little respect an Israeli shows to positions and the boss. As they are essentially warriors, they are left to fend for themselves based on the exigency of the situation. They are accustomed to fight vociferously with their bosses in the corporate administration, before taking a decision. It is rightly remarked that the brainstorming sessions in Israel look like the political situation in Middle East. This went a long way in ushering in an era of super-efficient organisations by cutting down all procedures and formalities.

Elsewhere, the procedures helped the managers to enslaven the subordinates to the whims and fancies with which the managers discharged their duties and administered the organisation. Organisations carried the personal imprint of the manager rather than the managers adapting themselves to the ethos of the organisations. Professionalism started hiding itself behind slogans, targets, awards, performance appraisals, vision, mission and a whole lot of managerial jargon that one comes across as a routine. Like philosophy cringing into the background with collection and dissemination of a huge quantity of information of dubious quality, O&M belongs to the vanishing creed. Very often, people wonder why the bureaucrats do not understand the futility of bureaucracy. Sam Pitroda believes that it is a question of change of mindset. By virtue of that belief, Pitroda is segregated from reality because bureaucracy is nurtured not for lack of mindset, but for preserving the vested interests of the leaders and managers. It is only by means of multiple procedures that the managers can get away with whatever they are doing. There is provision for sanctioning an act and there is also a provision banning the same act. This is dangerous for every organisation, and O&M will clearly show the self contradiction of the provisions.

Carrying on the principles of O&M, people will know that accountability is created where powers of an organisation are vested in. Authority and accountability go hand in hand. The faculty, which is not entrusted with any power in the college, is the last person on whom the accountability should be fixed. The only person in the college, who is vested with powers, is the Principal. But, there is no faculty feedback on the performance on the Principal. The leader of an institution can do a lot of damage on account of his drawbacks and limitations. A good leader can promote the welfare of the College. Instances are not rare that a positive regime brought credit and reputation to the institution which lingered on for many decades even after the leader parts with the institution. Neither a positive feedback is provided so that such leaders do not get the credit for the good work done by them, nor a negative feedback is possible to put a check on the undesirable acts and to bring about a non-discriminatory administration. The person for whom feedback is the most important is outside its ambit, but the people for whom they may not matter are brought under its purview.

In every institution, there should be feedback on the performance of every officer going up to the very top of the organisation. The good work done by the officer must be recorded and the bad work should be stopped at the earliest. At present, every officer functions on the basis of his personal likes and dislikes including prejudices resulting in groupism and nepotism. The most irresponsible and useless officers including caste fanatics, retire in the same way as the most dynamic leader the organisation has ever seen. There is no recognition of good work, nor is there any penalty to change such a leader. Many vice-chancellors and regional deputy directors of collegiate education spent their time at homes without contributing to their institutions. People endure such regimes as much as they benefit from highly committed officers. But, nothing goes into the record as there is no feedback on people in power.

The questions that make up the questionnaire are also very amusing. The important task that a Principal should do by himself is assigned to the feedback. Many a time the feedback includes questions that are the major responsibility of a Principal. The punctuality of the teachers, the completion of syllabus, regular attendance, proper preparation for the classes etc are included in the feedback. This is the most significant duty of a leader of an academic institution. That is the reason why an academician is heading the administration. When there are different answers for the same question, which answer is reliable and which is to be ignored is a crucial difficulty. For completion of syllabus pertaining to the same teacher, different students give different assessment as 50% completion, 75% completion and also 100% completion. I remember a faculty, who administered the feedback, looked into the feedback pertaining to her performance in the staff room. Except a few students, most of them answered as partial completion of the syllabus. Same class, same subject and same teacher, but the portions covered are different. What conclusion can be drawn from such varied inputs?

Once the feedback is obtained, it is necessary to show it to the concerned teacher. Very often, this is ignored. The justification is that the feedback may hurt the feelings of the teachers. Where the students give a negative feedback, the teachers should have the emotional equanimity to assess and accept the feedback. If the feedback is not shown to the faculty, the very purpose of the act gets defeated. I have also come across certain instances where the Principal and a small coterie privately view them for their personal pleasure. Instances are also there where the negative feedbacks are destroyed in case of the favourites of the leader. Such an act can come only from a faculty having a complex or one who does not know the quality of his or her own teaching. Teachers who do not have a proper conviction regarding what they have to do as a part of their duty very often get hurt by the feedback and may be misdirected. A Principal who is neutral in his relation with the entire faculty and also who has strong conviction about the requirement of teaching can help the faculty to have the right reaction to the feedback.

There are also institutions which conduct the feedback in order to satisfy NAAC requirement. A faculty needs to develop continuously in order to satisfy himself. The best benchmark for a teacher is his conscience to which he has to report every day. Teaching is not for the remuneration, but for the reward of job satisfaction. Every teacher should assume that he is the best ever to happen to the teaching profession. The assumption is the target for the teacher and not a sign of arrogance. At the end of the day, if the teacher can satisfy himself that every single act of his was done in promoting the interest of the students to the best possibility, then there is no need for any benchmark from outside. Such a teacher will have the maturity to understand that the rating given by the students is the best benchmark ever evolved by mankind.

The institutions must take a stand whether the feedback is achieving its purpose. There can also be instances where the students vent out their ire against the teachers for the events of the past. The faculty must be made mature enough to take the inputs in the right spirit. There should be a relation of counselling between the Principal and the faculty, and the set up in which the feedback is shared should have the counselling environment. The Principal’s chamber should never be the place to share the inputs. Though illogical, it may provide valid output for young teachers to correct themselves at an early stage. If it is done, there is at least a small justification for the exercise.

Many corporate have taken the environmental concerns very seriously. They have started relying upon emails to send communications, instead of by hard copies, in order to reduce paper consumption. Even the annual reports are sent by emails and the postal ballots are conducted through email only. This is a lesson for the administration of educational institutions. If feedbacks are conducted as eyewash or for the sake of NAAC compliance alone, the exercise can be abandoned to save a lot of paper. There are very many exercises like that: the year-end reports of achievements, the professional details provided at the time of visit by Local Inspection Committee of the University and a lot more documentation created for the purpose of NAAC compliance. NAAC has taken the right step by insisting on online submission of details. It is for the colleges and the universities to plan a comprehensive programme of reducing the consumption of paper by avoiding unnecessary reports and insignificant exercises.