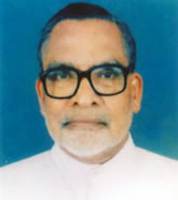 Thousands of students have studied under Fr Henry Castelino and have been inspired by his person. Ex Chief Minister of Karnataka Sadananda Gowda, urban development minister Vinay Kumar Sorake, Veer Chakr Major Gen Nanjappa, A S Bopanna, J R Lobo, the present MLA of Mangalore South and former commissioner of Mangalore, are some of the few outstanding names among the sea of his students.

May his soul rest in peace